The morning was crisp and slightly over cast with hardly a breeze.  Small Canadian flags placed by the 24th Guelph Pathfinders and bright red poppies made by students of Breslau Public School decorated the graves of veterans at rest in anticipation of the crowd that soon would come to honour them.

“Keeping memories alive – this is what Woodlawn Memorial Park is all about,” announced Paul Taylor, as he welcomed a large crowd at this year’s Remembrance Day Service following the Colour Parade of members of the Guelph Police Services, Guelph Fire Services, and the 11th Field Artillery Regiment, Guelph led by Aidan Maher, a Piper from the Guelph Pipe Band.

Each year, a story of a veteran who is resting at Woodlawn is shared at this event.  This year featured Walter Smith, a veteran of WWI, the great grandfather of Susan Farrelly, who has written our stories for the past few years. Susan presented the story herself and several members of Walter’s family were in attendance. No Remembrance Day service is complete without the laying of a wreath – and we often will ask a veteran to do this. This year the wreath was laid in honour of Walter Smith by two of his great-great grandchildren, Liam McCracken and David Farrelly, who were accompanied to the wreath stand by David Miller, Retired Staff Sergeant – Guelph Police and Steven Goode, Deputy Chief – Guelph Fire. Please read Walter’s story to understand why this was so significant.

To stand amongst the graves of those who served and experienced the horrors of war is a sobering experience, but with two minutes of silence marked at the beginning and end with a booming cannon blast from a C3 Howitzer, courtesy of the 11th Field Artillery Regiment, Guelph, this service touches the senses. Despite being a fraction of a standard charge, the sound was deafening. While the smoke still filled the air, the piper played the Lament and the Canadian flag was raised. Canadian pride and gratitude for freedom rang out as a quartet from the Royal City Ambassadors led the crowd in singing O’ Canada. To commemorate the 100th Anniversary of Armistice, Paul Taylor unveiled a bronze plaque to be installed in the veteran’s area.  It was generously donated by Phoenix Foundry Ltd.

The Colour Parade was dismissed, and the service concluded with the Royal City Ambassadors singing the White Cliffs of Dover in four-part harmony. Just before the crowd dispersed, the Waterloo Warbirds flew over with their DeHavilland DH 115 Vampire. Canada’s first fighter jet and the world’s first single jet engine aircraft. It was such an honour for this event to be included in their flight path.

After the service, Walter Smith’s family members placed 45 roses at his grave, and many attendees pinned their poppy to our communal wreaths on display. We are grateful to all who attended, volunteered, and worked to create this Remembrance Day service, but the greatest thanks go to those who fought for our freedom and paid the highest price.

They shall grow not old,
as we that are left grow old:
Age shall not weary them,
nor the years condemn.
At the going down of the sun
and in the morning
We will remember them.

More photos of the event can be found on our Facebook page. 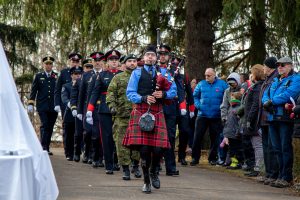 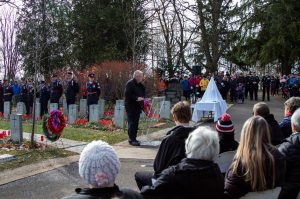 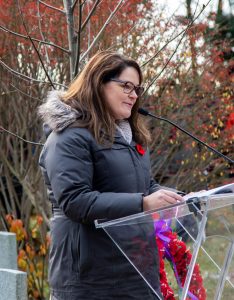 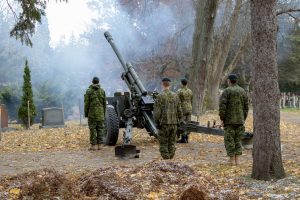 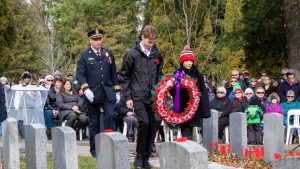 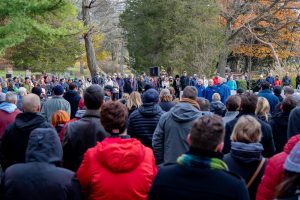 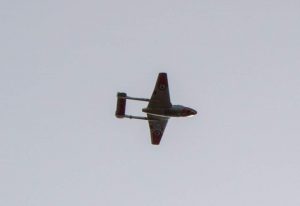 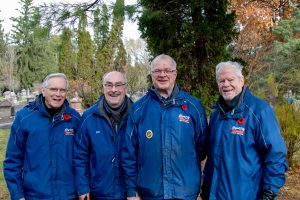 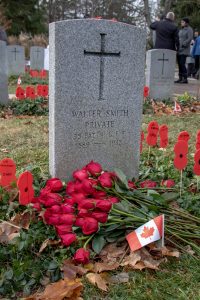 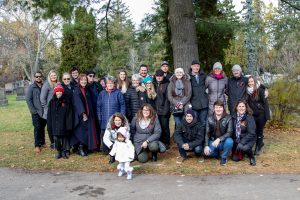 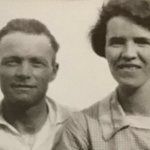 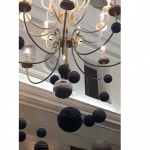